Road to Super Bowl 52: Divisional Round

An incredible Wild Card weekend on the Road to Super Bowl 52 is officially behind us, and four teams have taken that next step they needed. The field is down to eight teams remaining, and we’re looking ahead at the Divisional Round of the 2017-18 NFL Playoffs. 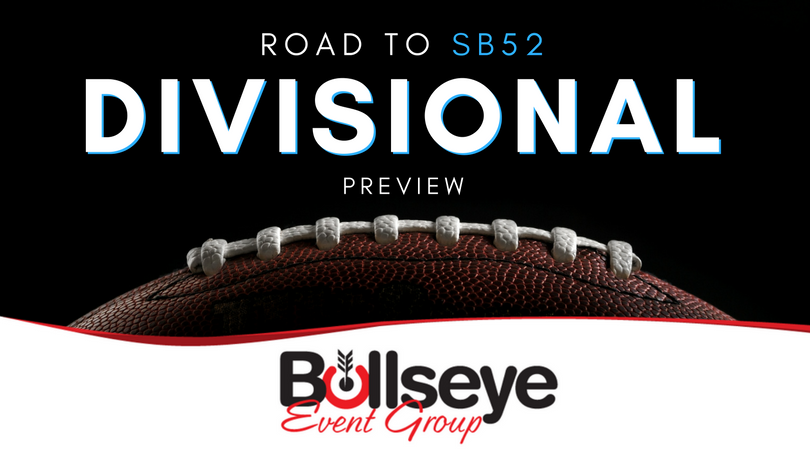 
For the first time since 2004, the Philadelphia Eagles (13-3) will host a divisional round playoff game. However, the team will most likely be underdogs heading into their matchup against the Atlanta Falcons (11-6), despite a 13-3 record and the #2 seed in the NFC.

A steady performance from the Falcons in their Wild Card matchup against the Rams, it was the defense that provided the necessary stops, holding the high-flying Rams offense in check and limiting the team to just 13 points in a 26-13 victory. The Eagles, despite a 13-3 record and one of the hottest offenses in the league early on, will have to find their rhythm with backup quarterback Nick Foles, as starter and MVP-candidate Carson Wentz will miss the entire postseason with a torn ACL suffered in the regular season.

First up on Saturday, the #Falcons travel to Philly to take on the #Eagles in a battle of the birds. Who’s walking away winners?


One of the unexpected storylines of the 2017 NFL season was the AFC South having not one, but two teams in the playoffs, and those two teams being the Jacksonville Jaguars and the Tennessee Titans. After a wild 22-21 victory over the Kansas City Chiefs in the Wild Card round, the Titans (0-7) are heading to New England to face their toughest test of the season; playing the Patriots (13-3), at home, in January, in the playoffs.

Despite rumored turmoil in the organization, the Patriots are a force to be reckoned with in the postseason at home, and many don’t expect this year to be any different. Quarterback Tom Brady finished the season with 4,577 yards, 32 touchdowns and just eight interceptions, a quietly fantastic year in what was otherwise a seemingly odd season for the Patriots.

Saturday night, the #Titans head to Foxboro to take on the top-seeded #Patriots (#GoPats). Who’s heading to the #AFCChampionship game?


Kicking off the Sunday action, the Jacksonville Jaguars (11-6) will head to Pittsburgh to take on the second-seeded Steelers (13-3) in the early game. Jacksonville hits the road after a less-than-stellar 10-3 victory over the Buffalo Bills in the Wild Card round, a victory that saw quarterback Blake Bortles with more rushing yards than passing yards.

The Steelers, fresh off the bye week, not surprisingly come into the matchup heavily favored. However, when the two teams matchup up early in the regular season, the Jags dominated the Steelers, a 30-9 victory that saw quarterback Ben Roethlisberger toss five interceptions. After that loss, however, the Steelers managed to win 10 of their final 11 games, with their only loss being the controversial late loss to the top-seeded Patriots.

Sunday kickoff at 1:05 p.m. ET, an AFC showdown as the #Jaguars head to Pittsburgh to take on the #Steelers (#HereWeGo). Who’s taking the cake?


Rounding out the divisional round will be the red-hot New Orleans Saints (12-5) traveling to Super Bowl 52 host Minneapolis to take on the surprise of the 2017 season, the Minnesota Vikings (13-3). In a previous Week 1 matchup between the two teams, the Vikings walked away with a 29-19 victory.

The Saints, fresh off their 31-26 thriller against the Carolina Panthers which saw a late game defensive stand, will bring their high-powered offense and staggering defense into Minneapolis to face the Vikings, who have also been one of the better teams in 2017 on both sides of the football.

Surprise MVP-candidate quarterback Case Keenum, who stepped in for the injured Sam Bradford, has completed 67.6 percent of his passes for 3,546 yards, 22 touchdowns and just seven interceptions in his 15 games this season. The Vikings defense, not to be outdone, ranked at the top of the league in points allowed per game at just 14.8.

And finally, wrapping up the divisional action, the #Saints (#GoSaints) head to #SB52 host Minneapolis to take on the top-seeded #Vikings (#Skol). Who’s one step closer to the Super Bowl?