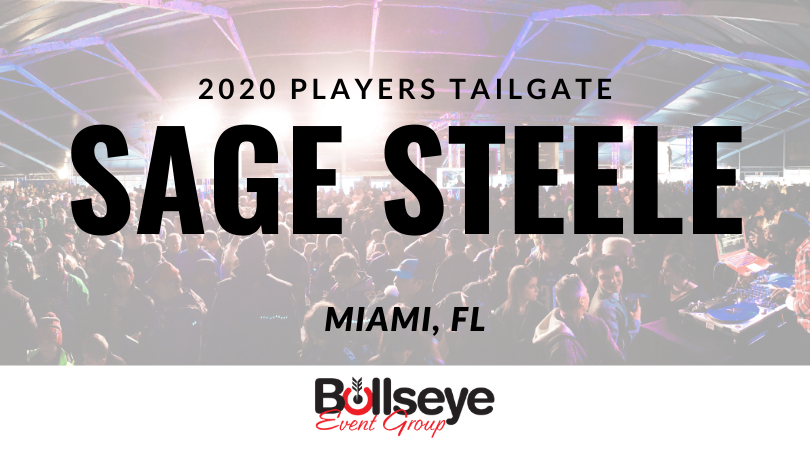 INDIANAPOLIS, IN — Bullseye Event Group is excited to announce the return of ESPN’s Sage Steele as the official emcee of the 2020 Players Tailgate at Super Bowl 54 in Miami, Florida.

One of ESPN’s most popular and respected personalities, Steele is currently serving as the anchor for the 6 p.m. ET SportsCenter with her co-anchor Kevin Negandhi. Steele also serves as the lead host for SportsCenter on the Road, which includes on-site, day-long and pre-event coverage for the biggest sports events of the year, including the NBA Finals, the Super Bowl, World Series, the Masters, the College Football National Championship and many more.

“Each and every year at the Players Tailgate, we’re committed to selecting an emcee that our fans and guests, as well as the players, will enjoy,” said Kyle Kinnett, CEO of Bullseye Event Group. “Sage was absolutely incredible at our 2019 Players Tailgate in Atlanta, and we couldn’t be more excited to welcome her back again in 2020 for the Super Bowl in Miami.”

Named SportsCenter on the Road host in September of 2016, Steele has showed her great range in sports by formerly hosting NBA Countdown on ESPN and ABC for four seasons. For five years prior to the NBA assignment, Steele was a full-time host of ESPN’s flagship SportsCenter show, and had previously contributed to ESPN First Take, Mike & Mike in the Morning, and SportsNation. Steele hosted SportsCenter’s daytime coverage of the NBA Finals in 2012 and 2013, and has covered every NBA Finals since 2012.

Steele joins host and celebrity chef Guy Fieri as he once again returns to create the VIP menu, joined by the greatest caterer in America, chef Aaron May, and a team of celebrity chefs hand-selected by Fieri himself. Steele, Fieri and more will all be on-hand to not only provide this culinary experience of a lifetime, but to hang out and meet all VIP guests at the 2020 Players Tailgate. The menu is still in the works and will be released in the near future on BullseyeEventGroup.com.

Tickets to the 2020 Players Tailgate at Super Bowl 54 in Miami can be purchased directly from BullseyeEventGroup.com, or are included in all of Bullseye’s Super Bowl 54 Travel Packages.

Bullseye Event Group’s Super Bowl 54 Travel Packages offer fans the chance to cross the NFL’s biggest game off their bucket list, without handling any of the logistics! A VIP experience throughout Super Bowl weekend includes some of the most luxurious hotels in the Miami area! Super Bowl 54 travel packages also include entrance into a Super Bowl weekend welcome reception (featuring food, a premium open bar and a live DJ), a ticket to Super Bowl 54 at Hard Rock Stadium, private motor coach transportation to and from the stadium on game day and entrance into Bullseye’s 2020 Players Tailgate at Super Bowl 54.

Call Bullseye Event Group today at 317-800-5820 for pricing and insider information regarding the Super Bowl 54 Travel Packages and the 2020 Players Tailgate at Super Bowl 54!

Bullseye Event Group has earned a reputation as being an industry leader in event hospitality prior to some of the biggest sporting events in the United States. Best described as “culinary events,” Bullseye’s official VIP events offer the opportunity to both see and be seen by some of the biggest names in the entertainment and sporting industries.