A change at the top in what looks to be promising future for the entirety of the NFC West headlined the 2017 NFL season. And despite faltering in the playoffs, the future for most of the NFC West appears to be bright, with one of the hottest new teams setting their sights on Super Bowl 53 in Atlanta. 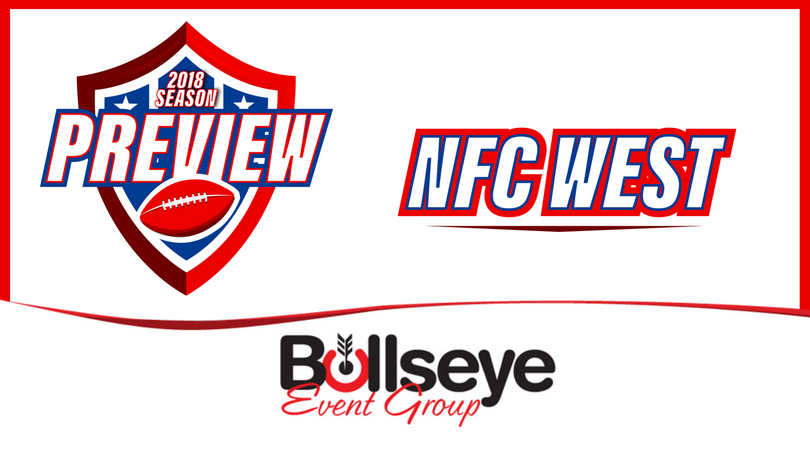 The surprise of the 2017 NFL season, rookie head coach Sean McVay and the Los Angeles Rams jumped out to a 7-2 start on the season before cooling off to finish at 11-5. And despite losing in the Wild Card round to the defending NFC champion Atlanta Falcons, fans appear to be impressed with what the Rams produced.. and they didn’t stop there.

Many are crowning the Rams as the ‘winners’ of the 2018 NFL Free Agency period, bringing in key additions (and big names) like defensive backs Marcus Peters (Kansas City), Sam Shields (Green Bay) and Aqib Talib (Denver), defensive tackle Ndamukong Suh (Miami) and wide receiver Brandin Cooks (New England). With such big names, and a seemingly successful campaign in 2017, expectations are rightfully high as we approach the beginning of a new season.

Opposite of their division-rivals in 2017, the Seattle Seahawks had a seemingly ‘down’ year in 2017, finishing at 9-7 and missing the playoffs.

The Seahawks weren’t content with trying for different results with the same team, opting to reload the roster through free agency with a slew of one-year contracts, including wide receivers Brandon Marshall and Jaron Brown, defensive pass rusher Barkevious Mingo, and boosting their secondary by signing defensive backs Mo Alexander,  and Dontae Johnson.

Fans will be left adjusting to a massively-different look for the Seahawks on defense, featuring the departures of staples such as cornerback Richard Sherman, who signed with the division-rival 49ers, and safety Kam Chancellor, who announced his retirement in late June.

In what seemed to be an odd year for the Cardinals, 2017 saw the team win and lose nearly every-other game, losing key players such as quarterback Carson Palmer to injury once again. And in the 2018 offseason, the Cardinals saw plenty of change.

Head coach Bruce Arians and quarterback Carson Palmer respectively announced their retirements early in the offseason, setting in motion a season of change in all aspects for Big Red. Bringing in quarterbacks Sam Bradford and Mike Glennon to battle for the starting spot, and drafting rookie quarterback Josh Rosen out of UCLA, ensures the team has plenty of competition in the QB room. The team also added some offensive weapons in the receiving corps, signing former Dallas Cowboy Brice Butler and drafting the talented Christian Kirk out of Texas A&M.

Quite possibly on of the more intriguing storylines to watch heading into the 2018 NFL season, the San Francisco 49ers started the 2017 season 0-9 and were seemingly playing for the draft. However, a mid-season trade their newly-minted franchise quarterback in former Patriot Jimmy Garoppolo helped spark the team’s wining 6 of their last 7 games to finish at 6-10.

Aside from trading for their franchise-quarterback, the 49ers did plenty in the 2018 offseason to help build around him, bringing in playmakers like former Vikings running back Jerick McKinnon, securing the offensive line and signing former division-rival cornerback Richard Sherman on defense. In the draft, the 49ers, grabbed a solid offensive line presence in Notre Dame right tackle Mike McGlinchey in the first round before grabbing Washington wide receiver and playmaker Dante Pettis in the second.