After a seemingly disappointing year in 2017 after such a successful campaign in the 2016 season, will the NFC South be able to rebound in the 2018 NFL season on the Road to Super Bowl 53 in Atlanta? 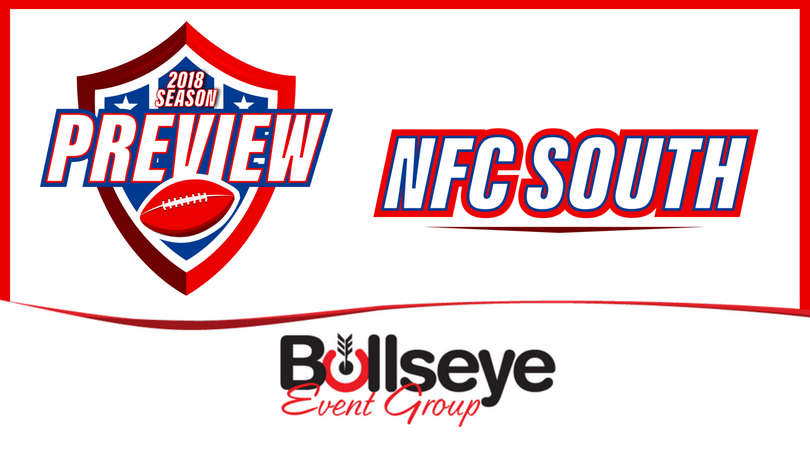 After a relatively disappointing year in 2016, the New Orleans Saints rebounded in 2017, clawing their way to an 11-5 record and walking away winners of the NFC South via a tiebreaker with the Carolina Panthers.

The 2018 offseason was about not only securing the present, but preparing for life post-quarterback Drew Brees. While the status of Brees’ re-signing was up in the air, the Saints and Brees eventually agreed to a two-year contract extension, giving the Saints a few more years to prepare for the future. But that doesn’t mean the team is using Brees as a placeholder. The team reloaded on offense, signing former Browns running back Terrance West to pair with 2017 offensive standout rookie in Alvin Kamara. Returning wide receivers Michael Thomas and Ted Ginn Jr., the team also signed former Bears wide receiver Cameron Meredith, brought back tight end Benjamin Watson, and re-signed offensive tackle Jermon Bushrod.

After finishing second in the division and trading offensive playmaking wide receiver Kelvin Benjamin, the Carolina Panthers were due for a minor reset in the 2018 offseason. However, a relatively quiet offseason leaves fans wondering what the 2018 edition of the Panthers might look like once they hit the field.

Just a year removed from a standout campaign in 2016, which saw the team capture the #2 overall seed in the NFC Playoffs and a Super Bowl LI appearance against the New England Patriots, the Falcons seemingly regressed in 2017, finishing with a 10-6 record and failing to make the playoffs.

The headline of the 2018 offseason thus far for the Falcons (and the NFL, for that matter) has been the ongoing contract negotiations (or lack thereof) with wide receiver Julio Jones, who reportedly is ready to holdout amidst the talks.

On the transactional side, the Falcons were relatively quiet on the free agency front, bringing in players like defensive backs Leon McFadden and Justin Bethel. But it’s the team’s 1st-round draft pick that has fans excited.. Calvin Ridley, a lengthy wide receiver out of Alabama, who has drawn comparisons to Jones himself.

After a disappointing 5-11 campaign in 2017, it appears the offseason made matters worse for Buccaneers fans across the country.

Re-signing quarterback Ryan Fitzpatrick became a priority the team didn’t know they needed after starting quarterback Jameis Winston received a three-game suspension due to conduct detrimental. And after losing running back Doug Martin (OAK) and a handful of key defensive contributors, the team was left looking at a minor rebuild.

Bulking up on the defensive side of the football, the Buccaneers signed Super Bowl champion defensive end Vinny Curry and acquired New York Giants standout Jason Pierre-Paul via trade, as well as drafting defensive tackle Vita Via out of Washington, adding to the depth of the defensive front-seven. To help on the offensive side, the team re-signed running back Charles Sims and drafted running back Ronald Jones out of USC to help carry the load.