The Indianapolis Colts will win the AFC South with a win against the Houston Texans on Sunday, December 14. Cheer them on before this pivotal home game at the final Colts VIP Tailgate of the regular season. 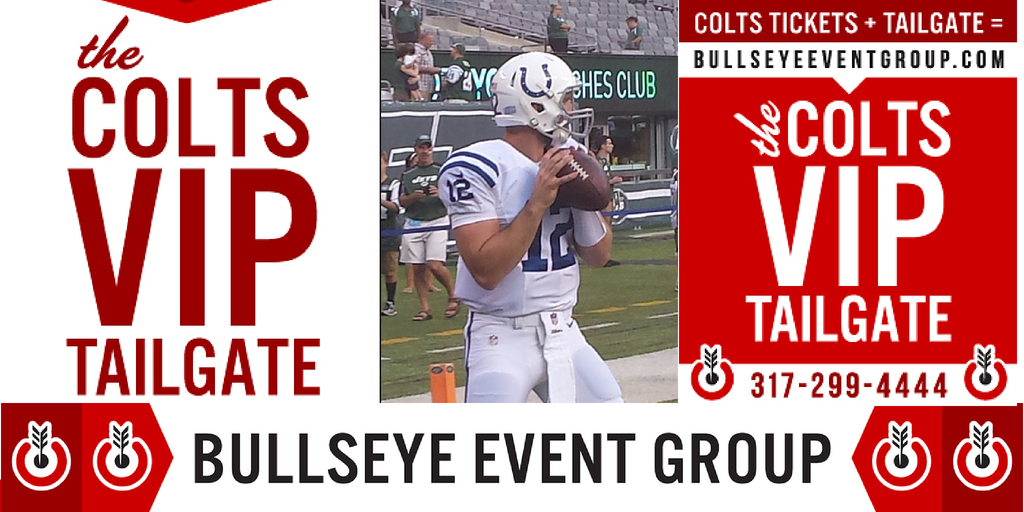 Indianapolis, IN (PRWEB) December 09, 2014 – Bullseye Event Group, the Official Events and Travel Partner of the Indianapolis Colts, invites Colts fans of all ages to the final Colts VIP Tailgate of the 2014 season.

Kicking off at 10:00 a.m. on Sunday, December 14, the Colts VIP Tailgate takes place at the Crane Bay Events Center, a short walk from Lucas Oil Stadium, where Bullseye hosts a lavish spread of gourmet food, top-shelf open bar, pre-game coverage and more, getting Colts fans ready for the last home game of the 2014 season.

When it’s time for football, individual game tickets are also available for Colts VIP tailgaters as the Texans travel from Houston to take on the Colts at 1:00 p.m. In addition, fans can buy tickets to Colts away games through Bullseye’s online ticket microsite, BullseyeTicketGroup.com.

“We’ve had a blast hosting the Colts VIP Tailgate, where fans can enjoy a 5-star food menu, premium refreshments and get ready for some football in a fun, family-friendly environment,” says Bullseye Event Group representative Kyle Kinnett. “The Colts are set to win the AFC South, and we’re excited to give them this fantastic send-off, all the way to the Super Bowl!”

Tickets for the December 14 Colts VIP Tailgate and the Texans-Colts game are available now by visiting BullseyeEventGroup.com.