Officially through Week 8 of the 2018-19 NFL season, the regular season has reached its halfway point. So what’s teams are looking like the league favorites to head to Atlanta at the end of the season for Super Bowl 53? 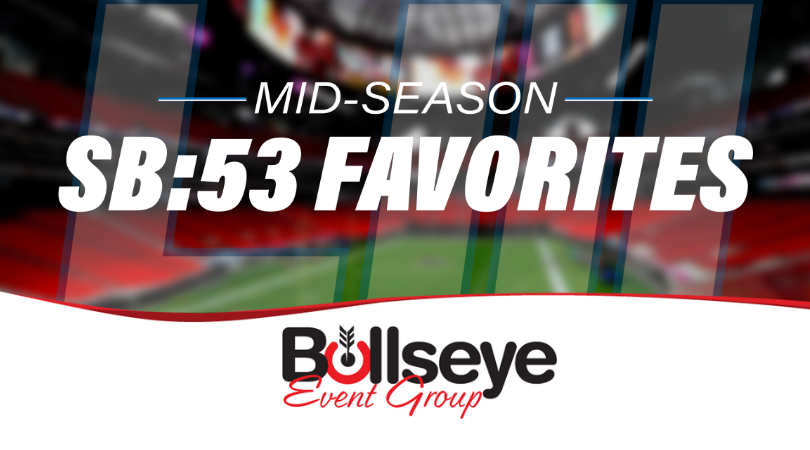 Touting one of the best offenses in the NFL (and the #1 rushing attack featuring running back Todd Gurley), the Los Angeles Rams once again find themselves the darlings of the NFL season, standing alone as the remaining unbeaten team at 8-0.

Quarterback Jared Goff has seemingly made another leap under head coach Sean McVay, completing 68% of his passes for 2,425 yards and 17 touchdowns thus far. The feature of the Rams offense, the aforementioned Gurley, leads the league in rushing with 800 yards and 11 touchdowns through the first eight games.

Until someone steps up and dethrones the Rams as the league’s lone undefeated team, the Rams will remain a heavy favorite to be the NFC representative in Super Bowl 53 in Atlanta.

One of the biggest surprises of the 2018 NFL season, the Kansas City Chiefs tout the league’s most prominent offense when it comes to scoring, racking up a staggering 36.2 points per game so far in the first half of the season.

A lone last-second loss to the New England Patriots stands between the Chiefs and an undefeated record, but that doesn’t deter any excitement when it comes to this Chiefs offense. Something many didn’t see come, the Chiefs are led by an early MVP-favorite in quarterback Patrick Mahomes, who has completed 66% of his passes for 2,526 yards and a league-leading 26 touchdowns.

As long as Mahomes is continuing to sling it, and key playmakers such as running back Kareem Hunt and wide receiver Tyreek Hill can remain healthy, this Chiefs team will remain one of the favorites to reach Super Bowl 53 in 2019.

After a disappointing end to the 2017 campaign following the “minneapolis miracle joe buck” the New Orleans Saints have surprised many, sporting the second-highest scoring offense (33.4 points per game) in the NFL to go alongside their staunch defensive front.

Quarterback Drew Brees, in a year where he set the record for most passing yards in NFL history, has thrown for 1,990 yards and 14 touchdowns, with Pro Bowl wide receiver Michael Thomas and running back Alvin Kamara seeing the lion-share of those targets (55% of Brees’ completions).

Not to be outdone, the Saints defense ranks #1 in rushing yards allowed per game, holding their opponents to an incredible 74.1 yards per game. With Brees at the helm and a solidified defensive from anchored by defensive end Cam Jordan and cornerback Marcus Lattimore, the Saints can never be counted out to make it to Super Bowl 53 in Atlanta in 2019.

Is it really a Super Bowl favorites “preview” without the New England Patriots? Despite another slow start to the season, the Patriots, touting the league’s fourth-ranked offense in points per game (29.9), have rattled off five-straight wins, most recently a 25-6 drubbing of the AFC East-rival Buffalo Bills.

One can argue that as long as head coach Bill Belichick and quarterback Tom Brady remain at the helm, the Patriots will continue to be favored to represent the AFC in the Super Bowl. And if the team can capitalize on the early five-game win streak and big divisional lead, they’ll be a favorite to reach Super Bowl 53 in Atlanta in February.