The next step on the road to Super Bowl 54 in Miami, teams are hoping to land their perfect fit in the 2019 NFL Draft. What are the experts predicting will happen in the first half of the first round? 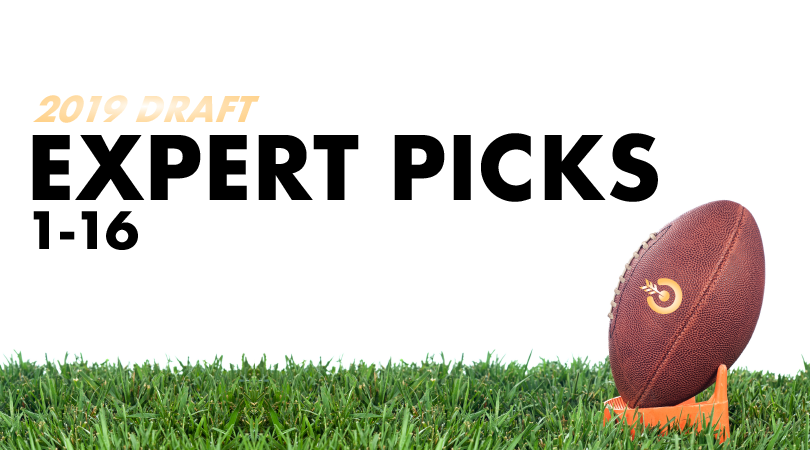 “Then-Texas Tech head coach Kliff Kingsbury recruited Murray to be his quarterback out of high school, as he’s the perfect fit for what Kingsbury wants to do offensively. If the Arizona Cardinals are brave enough to hire a head coach whose college alma mater fired him for failing to win games, they have to give him the right pieces to run his offense.”

“The 49ers would love to get an elite edge player to add to their defense. Bosa would be that.”

“The Jets are in the prime position to trade back with a QB-needy team. But if New York stays at No. 3, the J-E-T-S will gladly take the next-best pass rusher available.”

“The Raiders‘ only chance to get a premiere edge rusher is here, not in the 20s.”

“They are said to love this kid, but it’s really high for an off-the-ball linebacker. Even so, he’s a heck of a player.”

“The New York Giants need a quarterback of the future, and by all accounts, they want someone to learn behind Eli Manning for a short time much like Patrick Mahomes did with Alex Smith. Drafting a smart, talented quarterback who could benefit from some acclimation time in the NFL after only starting one year at Ohio State would help the Giants transition into their post-Manning era.”

“The Jaguars need to upgrade their offense this offseason. Jacksonville elects to add a receiver with unlimited upside.”

“With the class’s hottest name on the board available to fill the Lions’ biggest need, general manager Bob Quinn and head coach Matt Patricia would likely jump at the chance to make him a building block on the outside of the defense.”

“If I were the Bills, I’d move Dion Dawkins to right tackle and slide Dillard — the best pass blocker in the draft — in at left tackle.”

“The Broncos have Joe Flacco, but he’s not the long-term answer. Lock would be.”

“The Cincinnati Bengals desperately need to add speed on defense, whether at edge-rusher, linebacker, defensive tackle or in the secondary. That means the front office can select the best defensive player available, which would be Oliver.”

“The Packers filled a ton of needs in free agency. They fill a big hole on offense with the best tight end in the draft.”

“Since Miami’s biggest need is at edge-rusher, betting on one of the most productive and impactful defenders in college football over the last two seasons is a win at No. 13.”

“They have a problem next to Grady Jarrett, so why not take a player from the same school to fill it?”

“The Redskins have to do something at QB. If Washington doesn’t acquire Rosen, the Redskins might be forced to take a QB higher than expected.”

“It’s imperative for the Carolina Panthers to bolster their offensive line this offseason. If Cam Newton is healthy enough to play in 2019, the front office must protect him better up front.”