As teams get set for the month of April, the next step on the journey toward Super Bowl 53 in Atlanta involves invigorating the team’s rosters with an infusion of youth; the 2018 NFL Draft. We’re gathering some of the top experts from around the NFL world and taking a look at who they predict will go where, continuing with picks 6-10. 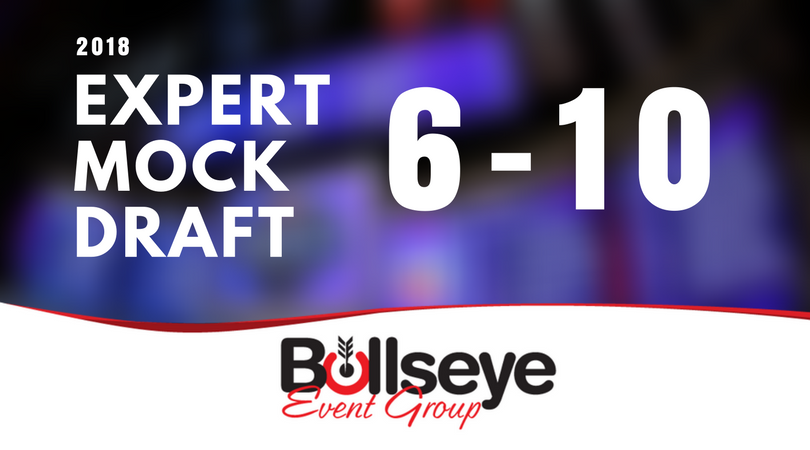 There are plenty of opinions on what the Indianapolis Colts might do at #6, but CBS Sports’ R.J. White thinks the team decides to stay put. “The Colts should be jumping for joy if they can get Chubb after trading back to No. 6. The NC State pass rusher is one of the two or three best players in the draft, and he happens to fill a big need for a Colts defense switching to a 4-3 under new defensive coordinator Matt Eberflus. A front consisting of Chubb, Jabaal Sheard, Henry Anderson and Al Woods could be nasty.” – R.J. White, CBS Sports

While many think Florida State’s Derwin James is the pick here, Bleacher Report’s Matt Miller thinks the Bucs get themselves a different defensive back at #7. “Fitzpatrick is a defensive eraser. Alabama moved him from corner to safety to a nickel spot throughout his career, and he flourished in each. The Buccaneers would likely identify him as a plug-and-play starter at strong safety. Given how productive he was in that role for the Crimson Tide, he could have a Jamal Adams-type of rookie season.    ” – Matt Miller, Bleacher Report

A consensus at #8, the Chicago Bears get some offensive line help to protect second-year quarterback Mitch Trubisky. “If you draft your franchise QB in 2017 (Mitchell Trubisky), you continue to surround him with weapons and protect him in 2018. The middle of the OL for the Bears will be formidable with Pro Bowl OG Kyle Long, talented C Cody Whitehair, and now Nelson, the best OL in this year’s draft.” – Charles Davis, NFL.com

While others think the 49ers might go with help in the defensive secondary, Bleacher Report’s Matt Miller thinks the 49ers will look to shore up their linebacking corps. “Tremaine Edmunds is just 19 years old and already looks like an immediate NFL starter. At 6’4 ½” and 253 pounds, he doesn’t look like a teenager and doesn’t play like one either. Edmunds is a versatile asset on defense, and given Reuben Foster’s off-field issues, he would also provide insurance in case the Niners lose last year’s first-rounder for an extended time. And should they get on the field together? Watch out.” –  Matt Miller, Bleacher Report

The run on the defensive side of the ball continues at #10, where CBS Sports’ R.J. White thinks the Raiders dip into Ohio State’s talented secondary. “The Raiders are seeing massive turnover at the cornerback position with David Amerson, Sean Smith and T.J. Carrie out the door. Rashaan Melvin was a nice pickup, but Shareece Wright is nothing more than depth. Enter Ward, an elite cover corner who has everything but prototypical size. He’ll be an excellent slot corner and should excel in Oakland, where Melvin and Gareon Conley can match up with bigger receivers.” – R.J. White, CBS Sports