As teams get set for the month of April, the next step on the journey toward Super Bowl 53 in Atlanta involves invigorating the team’s rosters with an infusion of youth; the 2018 NFL Draft. We’re gathering some of the top experts from around the NFL world and taking a look at who they predict will go where, finishing up with picks 26-32. 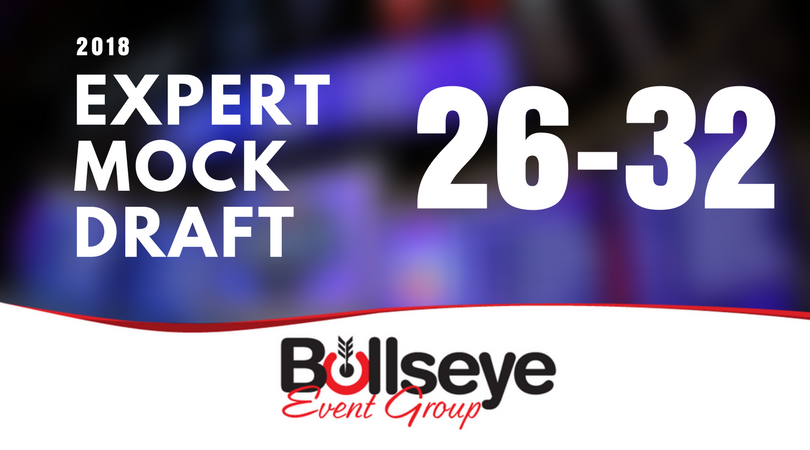 “The Falcons don’t have many needs, but one spot they could be targeting in the first round is defensive tackle, with Dontari Poe only signing a one-year deal last offseason. Bryan has earned some J.J. Watt comparisons despite the lack of stats at the collegiate level, and he put up similar numbers to Watt at the combine. Defensive tackle is one of the Falcons’ few needs, and they’ll be fortunate if Bryan makes it to them.” – R.J. White, CBS Sports

“The New Orleans Saints have a legitimate Super Bowl window at the end of Drew Brees‘ career. The best way to take advantage of that after nailing the 2017 draft is to get him a weapon for the middle of the field and up the seam. Hurst might get knocked for being an older prospect (25 at the start of the season) after playing minor league baseball for two seasons before playing college football, but he’s a stud. Hurst has the best combination of traits, as a pass-catcher and blocker, to get onto the field right away. In New Orleans, he’ll open up the entire offense for Brees, Alvin Kamara, Michael Thomas and Co.” – Matt Miller, Bleacher Report

“After signing Morgan Burnett to bolster the safety position, the Steelers turn their attention to linebacker, and find an instinctive one in Vander Esch” – Charles Davis, NFL.com

“Blake Bortles signed an extension that doesn’t necessarily lock him into being the Jaguars‘ long-term option at the position. With value not on the board at other potential positions worth targeting, the Jaguars grab Rudolph with the hope they can develop him into a guy who can raise the ceiling on the offense higher than Bortles has shown capable.” –  R.J. White, CBS Sports

“Just call this Ohio State north. After drafting center Pat Elflein in the third round last year, the Minnesota Vikings can now select the guy who took his job and also played next to him in previous seasons. Price excelled at center in 2017, but in Minnesota he’d go back to playing guard and can be a dominant force there. Lining up these two maulers side by side and handing the ball off the Dalvin Cook makes this offense potent. Add in that Kirk Cousins needs interior pass protection, and suddenly the prospect of getting Price looks good.” – Matt Miller, Bleacher Report

“The loss of starting LT Nate Solder to the Giants clears room for this athletically gifted youngster.” – Charles Davis, NFL.com

“With two potential tackle options coming off the board right before their pick, the Eagles pivot to taking Reid, a safety they’ve reportedly had a lot of interest in. Corey Graham is a free agent, so Reid can come in and immediately fill the third safety role for the Philadelphia defense while giving them a long-term plan when Malcolm Jenkins or Rodney McLeod get too old or expensive to keep.” – R.J. White, CBS Sports