As teams get set for the month of April, the next step on the journey toward Super Bowl 53 in Atlanta involves invigorating the team’s rosters with an infusion of youth; the 2018 NFL Draft. We’re gathering some of the top experts from around the NFL world and taking a look at who they predict will go where, continuing with picks 21-25. 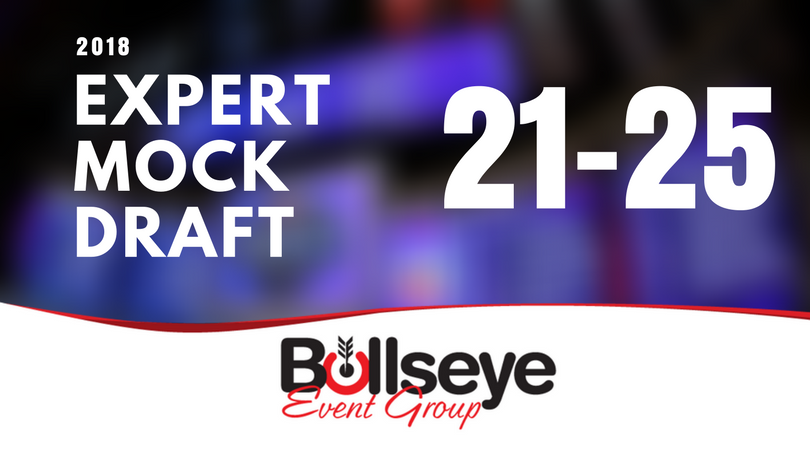 “The Bengals took a step toward addressing their offensive line woes by acquiring left tackle Cordy Glenn from the Bills and moving down to this pick. They should keep adding talent to the position with McGlinchey, who is a fit at either tackle spot. He’ll slot in at right tackle initially but could move to the left side if Glenn can’t stay healthy. Either way, drafting the Notre Dame standout puts the Bengals halfway to fixing their line issues.” – R.J. White, CBS Sports

“As part of the predicted trade for pick No. 6 overall, the Indianapolis Colts add this selection and get the workhorse running back they can plug in right behind Andrew Luck in Week 1.One of my philosophies is that a good running back makes the quarterback’s life easier, and that’s exactly what the physical, punishing, mean Guice would be as Luck gets back onto the field this season. The best way to take pressure off Luck is to give him a bell-cow back.” – Matt Miller, Bleacher Report

“The trade of Alec Ogletree to the Giants opens a spot for this gifted LB. Like so many of recent vintage from ‘Bama, Evans runs well, and is well-versed in pro-style scheme, and reasoning. Plus, he makes an impact as soon as he arrives.” – Charles Davis, NFL.com

“The first order of business for returning general manager Marty Hurney in this draft should be fixing the mess his predecessor, Dave Gettleman, left at cornerback. Even considering how badly the team needs upgrades on the offensive line and at wide receiver, the secondary should get a look first.Louisville’s Jaire Alexander might not fit the size profile for some teams at 5’10 ¼” and 196 pounds, and he was banged up in 2017 with hand and leg injuries, but he’s a physical player at the line of scrimmage and in coverage. Alexander can match up with taller receivers thanks to his speed and instincts. His tool set would make him the Panthers’ best cornerback right away.” –  Matt Miller, Bleacher Report

“Landry is an athletic freak as an edge rusher, but he’ll likely be better served not playing a large role as a rookie while he adjusts to the NFL and potentially bulks up. That should be just fine for the Titans, who will have a huge need at edge rusher next offseason with Brian Orakpo and Derrick Morgan slated to reach free agency. Landry can be a subpackage player in Year 1 and eventually take over one of those starting spots in 2019.” – R.J. White, CBS Sports