As teams get set for the month of April, the next step on the journey toward Super Bowl 53 in Atlanta involves invigorating the team’s rosters with an infusion of youth; the 2018 NFL Draft. We’re gathering some of the top experts from around the NFL world and taking a look at who they predict will go where, continuing with picks 16-20. 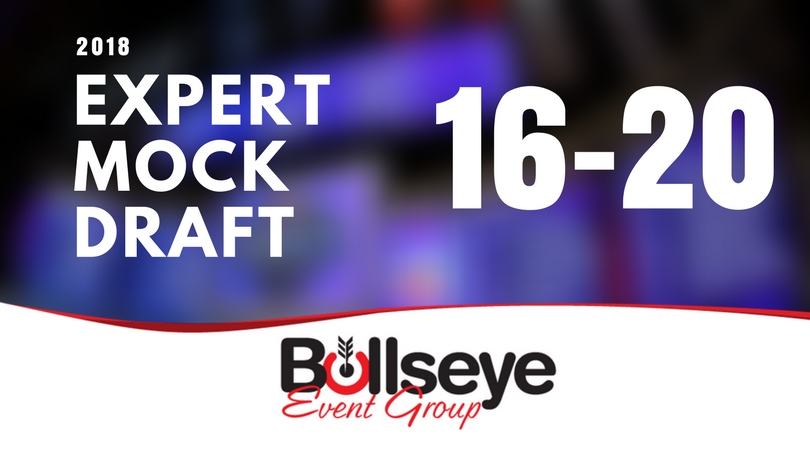 “The Ravens get a great value here in Edmunds, who doesn’t turn 20 until after the draft and has as much upside as any prospect this year. He’s scheme versatile and should be an interesting chess piece for the Ravens’ defense, someone who can line up next to C.J. Mosley inside or potentially be groomed to take over for Terrell Suggs down the road.” – R.J. White, CBS Sports

“The first offensive tackle comes off the board at pick No. 17, and he’s an excellent fit and value for the Los Angeles Chargers. An aggressive 2017 draft and the signing of Mike Pouncey has the line in good shape for this year, but the future needs addressing, and Williams can be that left tackle of the present and long-term plan.” – Matt Miller, Bleacher Report

“With the loss of DT Sheldon Richardson in free agency, and an obvious rebuild needed on that side of the ball, a pick to help the D makes sense. But, it also makes sense to do more to take care of the team’s No. 1 asset, QB Russell Wilson.” – Charles Davis, NFL.com

“Defense, defense, defense. That’s how the Cowboys’ draft board should read with a wide receiver and offensive guard sprinkled in along the way. Rashaan Evans can do it all—NFL clubs have asked him to play outside linebacker or edge-rusher. In Dallas, he’s a natural to replace departed free agent Anthony Hitchens and adds youth and speed to a defense that’s being rebuilt well through the draft.” –  Matt Miller, Bleacher Report

“The Lions re-signed Nevin Lawson and brought in Deshawn Shead, but neither should prevent them from selecting a potential starter at the position across from Darius Slay should the right opportunity present itself. Matt Patricia gets a ballhawk with this pick who led the nation in interceptions last year.” – R.J. White, CBS Sports