As teams get set for the month of April, the next step on the journey toward Super Bowl 53 in Atlanta involves invigorating the team’s rosters with an infusion of youth; the 2018 NFL Draft. We’re gathering some of the top experts from around the NFL world and taking a look at who they predict will go where, continuing with picks 11-15. 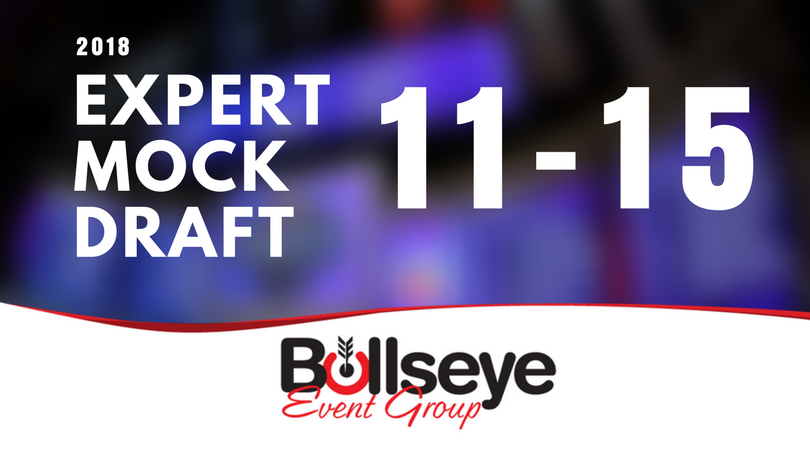 “The Dolphins have been showing interest in Smith, one of the draft’s top linebackers. He’d be the long-term stud the team needs next to Raekwon McMillan, and the Dolphins could make him the immediate starter at WILL and look to trade Kiko Alonso to another team where he’d be a better fit. They can also think about getting out from Alonso’s deal next offseason if nothing else.” – R.J. White, CBS Sports

“After trading back, again, the Indianapolis Colts will gain pick Nos. 12, 22 and 96 in this hypothetical deal with the Buffalo Bills in exchange for the No. 6 spot.At No. 12, Ballard and Co. still get a top-notch player who fills a huge need. Marcus Davenport is raw, coming from tiny Texas-San Antonio. But he showed during the season, at the Senior Bowl and the combine that he’s the type of athletic rarity who can make the needed improvements to make an early NFL impact.” – Matt Miller, Bleacher Report


“Nothing wrong with more speed being added on defense, and Smith fits the bill. He’s often favorably compared to Atlanta MLB Deion Jones due to his build, and ability to play FAST.” – Charles Davis, NFL.com

“An offseason of change has the Green Bay Packers looking like a new team heading into the draft. But that new team still has holes to fill at pass-rusher, wide receiver and cornerback.Iowa’s Josh Jackson didn’t help his cause with a 4.56-second 40-yard-dash at the combine, but his play shows a cornerback with ball skills, technique and toughness. He’s a natural fit in defensive coordinator Mike Pettine’s scheme, and he and Kevin King give them one heck of a young cornerback duo.” –  Matt Miller, Bleacher Report

“Jackson isn’t everyone’s cup of tea, but the Cardinalshave an offensive coordinator in Mike McCoy who can build the offense to the dynamic prospect’s strengths. Jackson isn’t ever going to be the best passer in the league, but good luck defending a running game that features David Johnson and the threat of the QB running at any time. The Cardinals would ideally trade up for one of the top four QBs, but with so many holes on the roster, they can’t afford to sacrifice picks.” – R.J. White, CBS Sports