As teams get set for the month of April, the next step on the journey toward Super Bowl 53 in Atlanta involves invigorating the team’s rosters with an infusion of youth; the 2018 NFL Draft. We’re gathering some of the top experts from around the NFL world and taking a look at who they predict will go where, starting with picks 1-5. 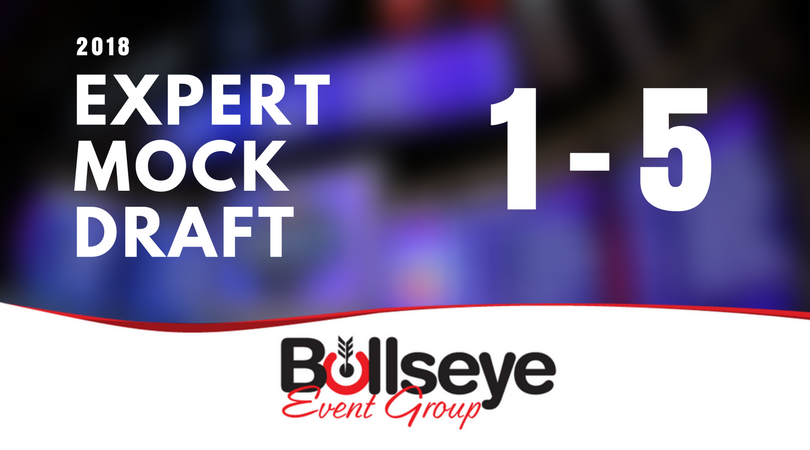 Although a quarterback feels like the consensus #1 pick here, NFL.com’s Charles Davis feels differently. “In the Browns’ history, when they have been really good, they have been powered by runners: Marion Motley, Jim Brown, Ernie Davis (would have been a huge star if not for his passing at the age of 23), Leroy Kelly, Kevin Mack, Earnest Byner. Add the do-it-all dynamo from Penn State to the pantheon.” – Charles Davis, NFL.com

There are a lot of directions, including trading down, that the New York Giants could go with the #2 overall pick, but Bleacher Report’s Matt Miller thinks they go defense. “Chubb is an ideal weak-side linebacker fit in the Giants’ new 3-4 scheme. Pairing him with Olivier Vernon would give new head coach Pat Shurmur a stud defensive duo. That might also help give quarterback Eli Manning a little bigger window to win a third ring before retiring.” – Matt Miller, Bleacher Report

The one area where all experts seem to agree in this draft is at the #3 pick, where the New York Jets are expected to take a quarterback. “The trade-up for the Jets was all about getting into position for a quarterback, and if they can find a franchise signal-caller here, it’s well worth the overpay to move up a couple spots. Walter Football’s Charlie Campbell compares Rosen to Jay Cutler, a quarterback with which new Jets offensive coordinator Jeremy Bates has plenty of experience. Rosen could be the best fit for the Jets moving forward.” – R.J. White, CBS Sports

After taking a risk on a running back and waiting it out, NFL.com’s Charles Davis thinks Browns still get their man at #4. “The man that many have written in as the top selection for the Browns still lands in Cleveland. Of course, he will be strongly considered for each of the top three picks, but Browns owner Jimmy Haslam (who sat in the rain to watch Darnold’s pro day at USC on Wednesday) gets a new face of the franchise in an unexpected way.” – Charles Davis, NFL.com

Finally, controversial quarterback Baker Mayfield out of Oklahoma finds a home at #5. “Mayfield is a fiery prospect with an exciting track record on the field but a personality off it that might rub teams the wrong way. Broncos president John Elway probably cares more about getting back to his winning ways. Mayfield can help him get there.” – Matt Miller, Bleacher Report