The day before the 2017 NFL Draft, find out who experts believe will go #26-32, rounding out the first round on Thursday night. 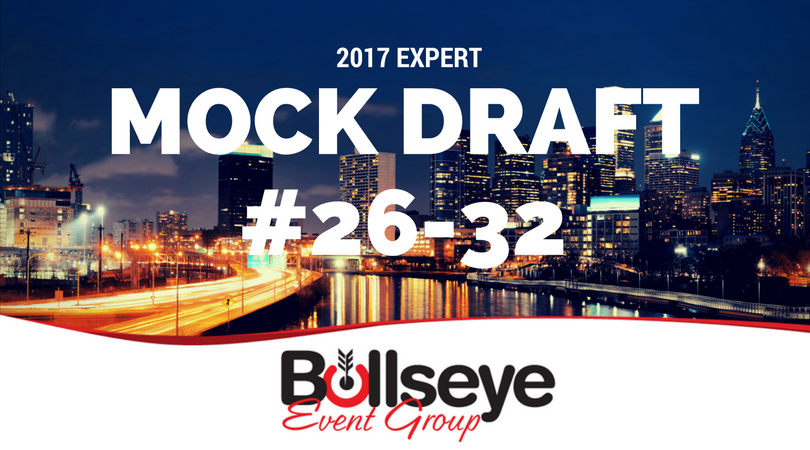 “Ryan Ramczyk is am[sic] intriguing option, given his tools and tape, but he started just one season at Wisconsin and is dealing with a torn labrum that’s limiting his pre-draft workouts. The tools are there when you watch him in Big Ten tape, but you’re betting on his continued development on a small sample size.” – Matt Miller, Bleacher Report

“With Derrick Johnson set to turn 35 next season, McMillian is an athletic playmaker who could provide a smooth transition once Johnson calls it a career. Vanderbilt’s Zach Cunningham is also an option here, but a lackluster combine could have personnel types revisiting his game tape.” – Ryan Wilson, CBS Sports

“The classic “excellent veteran is aging, so let’s find him a replacement” scenario surfaces yet again. Here, Jerry Jones finds a successor for Jason Witten. Njoku, one of the youngest players in this year’s draft (he turns 21 in July) has a high ceiling, as he has only been playing tight end for two years. A core featuring Njoku, Dak Prescott (23-years-old) and Ezekiel Elliott (21)? That will keep Dallas front-running in the NFC East for years to come.” – Emily Kaplan, MMQB

“The Packers are in the market for pass rushers. And what’s better than having one Clay Matthews? Having two — Watt (yep, he’s J.J.’s younger brother) has drawn comparisons to Matthews. Measuring 6-5, 243, Watt ran a 4.69 40 at the combine, and finished last season with 11.5 sacks and 15.5 tackles for loss.” – Ryan Wilson, CBS Sports

“Takkarist McKinley is tailor-made for the 3-4 pass-rusher role the Steelers need. He’s long, physical, fast and has the production on tape to warrant a first-round selection. He is undergoing shoulder surgery as I’m writing this for a torn labrum, but will be back in time for minicamp. After an impressive showing in Indianapolis, McKinley should be a first-rounder.” –Matt Miller, Bleacher Report

“The Falcons could use pass-rushers. The going rule in today’s NFL is that you need three good ones to be successful. Pair Harris with the Clemson crew (Vic Beasley and Grady Jarrett, coming off a breakout Super Bowl performance), and Atlanta has a trio to harass quarterbacks of the NFC South for a very long time.” – Emily Kaplan, MMQB

“McCaffrey is a dynamic running back, a versatile offensive weapon and a top-notch athlete. Whether he’s in New England, Kansas City or Green Bay (my ideal fits) he’ll be a threat as a runner, receiver and return man. However you can get him touches, he’ll respond with yards and points.” –Matt Miller, Bleacher Report