Tickets for the NFL Draft 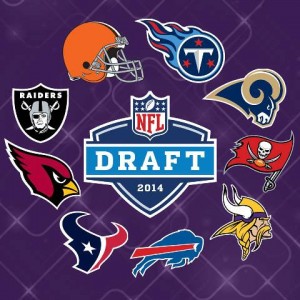 Thursday night, May 8 at 8:00 p.m. ET is the start of the NFL Draft, one of the most exciting events on the NFL calendar!

“Years of hard work and perseverance result in the realization of lifelong dreams for the young men selected to join NFL teams,” says Patrick Kerney, Vice President of NFL Player Engagement, in a recent letter to NFL fans. “I certainly remember my 1999 call from the Atlanta Falcons telling me they had selected me in the first round. That moment made every ounce of effort I had placed into the game of football more than worth it.”

While so much of the NFL Draft is about the future, the NFL also honors the men who built the game into what it is today. For the second round on Friday night, 32 former NFL players -one representing each team- will announce the Draft pick of the teams for which they played. The list of players scheduled to make selections includes 11 Pro Football Hall of Famers, with five from the Class of 2014. Combined, these players have nearly 20 Super Bowl championships and 150 Pro Bowl appearances between them:

This marks the fourth year in which each selection in the second round is announced by a former player.

The NFL Draft takes place from Radio City Music Hall in New York and continues with the three-day format introduced in 2010. Visit Bullseye’s discount ticket microsite for your seats to watch NFL teams select new players that can help deliver the Lombardi Trophy to their fans –LIVE!

NFL Player Engagement offers services and programs to assist this year’s draft picks, as well as all aspiring, current and former players, in leveraging their NFL experience into long-term success. You can learn more here about how the NFL supports players in their lives off the field by visiting https://www.nflplayerengagement.com.

(Hall of Famers are listed in bold and the class of 2014 is indicated by **.  The Kansas City Chiefs, marked with a *, do not have a second-round selection, barring a trade into Round 2.  Curley Culp will announce their Round 3 pick).