Strange Predictors of the Super Bowl 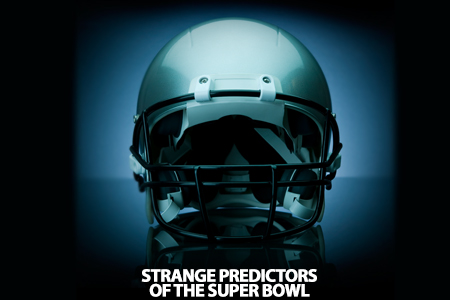 The team who gets crowned victors for Super Bowl 50 will hold a legendary title. But, guessing who that winner will be is tricky. Even now that we’re in the playoffs, it’s still a big question mark. Lucky for us, there’s a long history in predicting Super Bowl winners. Even better, that history is a bit strange. Here’s a look at some of our favorite odd predictors of Super Bowl victory. But, really, you might be better off just flipping a coin.


One predictor of who will win the Super Bowl is the jobless rate. Seriously. CNBC says the team who’s city has a lower unemployment rate during the previous year is more likely to win the Super Bowl. They suggest the prosperity of a city has to do with how well their team will fare. Maybe it has something to do with morale? Or maybe if the team is from a thriving area, the football fans will have more money to spend. If the denizens are more financially stable, they might be able to travel to the Super Bowl. And more fans in the stadium can make a team a home-town favorite.


There’s also the old-standby way of predicting who will win. Playing EA Sports’ NFL Madden video game. The virtual simulation of the Super Bowl contenders makes something of an educated guess about who will win. As of last year, the predictions ran at 80%. Not too shabby.


Predicting who’s going to win might also depend whether or not the professional football players are early birds or night owls. This one makes a bit of sense, sorta. The idea is that because athlete performance varies widely throughout the day, in turn, the players used to playing at night do better, while the players who’s body clocks are more accustomed to the early morning, do worse playing the late night Super Bowl game. Of course, time zone, overall player health, age, diet, and training all still matter. Incorporated in this idea is cognitive ability as well. Football is sometimes called – chess on a playing field. For example, reading opponents is a necessary component of winning, but might be harder to do with a tired mind. When players are sleepy, they might not preform up to expectations. It’s an interesting theory at the very least.


Don’t lets forget the somewhat strange idea that the US stock market health for the new year depends on who wins the Super Bowl. The theory goes that if the AFL wins the championship title, the market will end down. Whereas if the NFL takes home the Lombardi trophy, the stock market prices for the year will go up. They call it the Super Bowl Market Predictor. And as of now, it hovers around the 75% accuracy mark. That’s not so bad. But, it’s a bit scary to think that the fate of the US economy might depend upon one game of football.


Along with strange predictions, there are also strange deterrents. No NFL coach has ever won the Super Bowl twice with two different teams. Hopefully, it would never be a good enough reason to hire a great head coach, but the fact still remains true. It would make sense that a team leader who’s been to the Super Bowl before, would do better if he gets there again. In reality, the option hasn’t presented itself very often to very many coaches. Regardless, it’s still a bit mind-boggling.


There are also a few more serious predictors of the Super Bowl, point differential during the regular season, previous Super Bowl experience, better defense, scoring the first points, leading at halftime … the list goes on and on. The conventional option of predicting the Super Bowl is statistics. Mathematical models.

Statisticians and researchers look at the injuries, turnovers, passing yards, rushing, total yards gained, touchdowns, possession time, third-down conversion rates, sacks, completions, etc. This prediction theory has the longest history. It makes the most logical sense. Really, taking all these factors into account should make the game as dry and boring as the box-score. But, it’s not nearly as much fun. It also doesn’t take into account the human variables that change every game.


ESPN favors the Arizona Cardinals to be this year’s Super Bowl champs. Their FPI says the Cardinals have a 29% chance of being in the 50th Super Bowl. Compare that to the next best team with the Panthers at 20%. They see the Cardinals as the most “complete team.” And there’s a good chance they’ll be playing the New England Patriots. If you want to see the championship NFL game even if you’re not yet 100% who will be playing, Super Bowl 2016 tickets and packages are available. Or if you want to wait to buy tickets until you’re sure your team will make it, we understand.