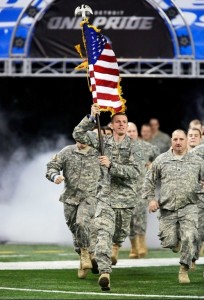 On this Veteran’s Day …

supporting our Armed Forces is an important tradition for America and Bullseye Event Group is honored to highlight the NFL’s events and efforts that support our men and women in the military through the Salute to Service campaign.

NFL teams and their fans not only pause to recognize the sacrifices being made every day on our behalf, but participate in the Salute to Service campaign, which raises funds to benefit three of the military’s largest nonprofit partners: The USO, the Pat Tillman Foundation and the Wounded Warrior Project. For every point scored during one of the designated “32 Salute to Service” games throughout November, USAA in partnership with the NFL, is donating $100 to each nonprofit partner.

You can reserve your seat to see the Indianapolis Colts salute our armed forces when they face the New England Patriots at Lucas Oil Stadium, Sunday November 16; view the full schedule for the 32 Salute to Service games at NFL.com and give us a call at 888-900-6564 for tickets to any Salute to Service game.

While at Lucas Oil Stadium, be sure to check out the “Chair of Honor,” located on the loge level in the southeast corner of the stadium near section 423. Recently dedicated by the Indianapolis Colts in partnership with Rolling Thunder® Indiana and Lucas Oil Stadium, the chair honors American Heroes who are still listed as Prisoner of War (POW) and Missing in Action (MIA), and serves as a symbol for service, sacrifice and in recognition of the 82,000 service members who are still unaccounted for nationwide.

“All Americans should honor and respect our military who defend our freedom. Those who serve, and their families, make many sacrifices. Some pay the ultimate price.”

In conjunction with the Salute to Service games, the Salute to Service Award will be given to members of the NFL who have displayed exceptional efforts to both honor and support our servicemen, women and veterans. This year, Colts punter Pat McAfee is nominated along with fellow NFL players. Join us on Twitter to spread the word about the campaign, which has already garnered over 3,000 tweets! #salutetoservice

In addition, you can support Salute to Service by participating in the NFL’s live auction. Find signed jerseys, helmets, footballs and more -perfect for Christmas gifts.