Three years ago this week at the NFL Owners’ meetings in Ft. Lauderdale, Florida, Super Bowl XLIX was awarded to the State of Arizona, beating out Tampa Bay, Florida for arguably one the world’s biggest single-day sporting events of 2015. 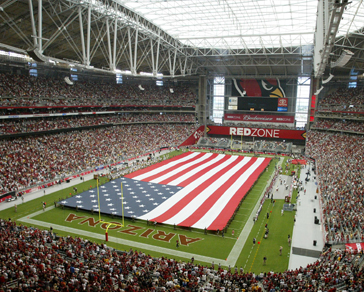 “Being awarded Super Bowl XLIX is a testament to Arizona’s outstanding effort in hosting Super Bowl XLII,” Arizona Super Bowl Host Committee Chairman Mike Kennedy said at the time, “and a reflection of the NFL’s faith in us to put on a first-class event.”

Welcome Return to the Valley of the Sun

It seems the traditional outdoor, cold-weather sport –and football fans themselves- simply love being part of a Super Bowl in Arizona! Perhaps it’s because the average temperature in February is 60 degrees, perfect football weather, or maybe it’s University of Phoenix Stadium’s reputation for welcoming incoming teams – or the fact that Super Bowls are usually played in warm climes or climate-controlled stadiums, so the weather isn’t a factor in the game’s outcome. Certainly, the entire Phoenix area is an exciting winter destination, offering museums, botanical gardens, a variety of other sporting events, world-class golf, casinos, luxury shopping, outdoor activities and plenty of live entertainment –as our 2015 Super Bowl Travel Packages can attest to (check them out!). And if you haven’t seen an event at the University of Phoenix Stadium, you’re in for an incredible experience!

Tickets are on sale now at Bullseye Event Group!