How Indianapolis Prepares for Game Day

It’s impossible to go anywhere in Indianapolis without seeing the Colts horseshoe. They’re everywhere: on cars, buildings, shirts, bicycles, phones, pants, houses, flags, and even on tattoos. It’s easy to say Indianapolis football fans only follow the Colts because they’ve had two great quarterbacks back to back. But with the amount of pride the city shows, even in the bad seasons, it’s safe to say Indianapolis has become a football city. And before game day, Indianapolis and Colts fans get a little crazy bleeding blue to show their Colts pride and support their favorite team. 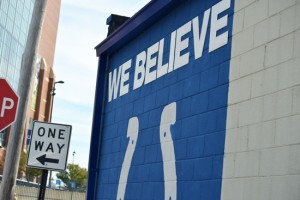 It’s become an Indianapolis tradition. Blue Friday. The Friday before a Colts game, fans deck out in their best Colts gear. They get the opportunity to wear blue to work. (Because who doesn’t love to wear a jersey instead of a collared shirt?) Some kids even get to wear a jersey to school instead of their uniform. The Colts organization and sponsors hold giveaways, discounts, and special merchandise to create excited and build hype for that week’s game. All the local news stations and friends get in on the action. It’s also a helpful reminder of when exactly all those Colts games are.

Indianapolis is truly a great sports town. The fans are loyal, informed, and most importantly loud. The noise in Lucas Oil Stadium should take the credit for that last victory against the Jacksonville Jaguars. Right as the Jacksonville kicker was trying to make the would-be game winning goal, the fan’s noise tremendous noise threw the kicker off balance to miss the shot. Colts fans are loud and proud in the stadium and when the party before the game.

Around the city, before the games, there are great parties and tailgates. So if you’re looking for something to do before a Colts game, you’ve got some options. There are parties with the Blue Crew, tailgates in Tailgate Alley, and on Georgia Street. Of course, we recommend the Colts VIP Tailgate Party, but then, we might be bias. We have Colts cheerleaders, past NFL players, and great food at our tailgate. We think it’s pretty great. But, no matter where you celebrate the game in Indy, it’s great to see so many people come out to support the Colts and party before the game. Lucas Oil Stadium holds some awesome game day activities inside the stadium as well if you’re looking for something after you’ve already had your ticket scanned.

As far as pre-game activities go Indianapolis is a pretty great city to be in. Who knows, if you decide to attend a Colts event downtown, you may even get to see the hilarious Colts mascot Blue.

And as always, Go Colts!