Indianapolis, IN October 13, 2014 – The Indianapolis Colts are having a fantastic season so far, with a 4-2 record and a four-game winning streak. In the recent Thursday Night Football’s high-energy game, Andrew Luck and the Colts managed to hold the Houston Texans to a 24-0 lead after the first quarter but by the fourth, things got a little too close for comfort. The Colts recovered two fumbles in the final minutes of the game, landing a 33-28 victory over the Texans.

The next Colts match-up after the bye on Sunday, October 19 has the Cincinnati Bengals traveling to Lucas Oil Stadium. The odds are leaning in the Colts’ favor for higher numbers in both passing and rushing yards over the Bengals. Quarterback Andrew Luck is also giving fans a great season thus far, with 17 TD’s under his belt -this next match-up will certainly add a few more to his TD count. 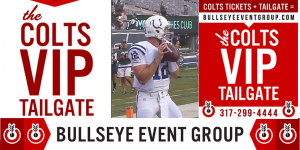 When the Bengals come to town, that also means it’s time for the next Colts VIP Tailgate, hosted by Bullseye Event Group. Not only is this event the most exciting tailgate party in town, it may be the most star-studded, family-friendly and lavish tailgate fans are frequenting during this year’s Colts football season. Catered by Ruth’s Chris Steak House and Indianapolis’ own Another Broken Egg Café, the Colts VIP Tailgate takes place at the exclusive Crane Bay Events Center, just blocks away from Lucas Oil Stadium. The party features a popular wine and beer bar, top shelf adult beverages as well as refreshments, silent auctions, celebrity appearances, live radio events with 1070 The Fan and more.

“I need to say thank you to Bullseye. I surprised my boyfriend because he has never been to Lucas Oil for a Colts game,” says Kaitlin, who attended the Colts VIP Tailgate with her boyfriend Eric before the Colts home opener on Monday Night Football. “We started the evening off right and in style at the tailgate. The catering was from Ruth’s Chris and we loved it! We both went up for seconds. We also made several trips to the bar and the bartenders were awesome and super helpful in suggesting drinks. It was also great listening to 1070 live and meeting all the guys. Overall, the evening was absolutely splendid and we couldn’t have wished for it to go better.”

The Colts VIP Tailgate kicks off three hours before the Bengals-Colts game at 10:00 a.m. on Sunday, October 19. Attendees enjoy live pre-game coverage, an all-you-can-eat five-star catered buffet, endless drinks and a free shuttle ride to and from the game. Buy tickets for the Colts VIP Tailgate as well as seats for the Bengals-Colts football game online at BullseyeEventGroup.com or contact Bullseye Event Group by phone at 888-900-6564.