While teams are quietly hard at work preparing for the 2017 NFL season, we’re taking a look at the full schedule, game-by-game, for the Indianapolis Colts. Next up: weeks 5-8. 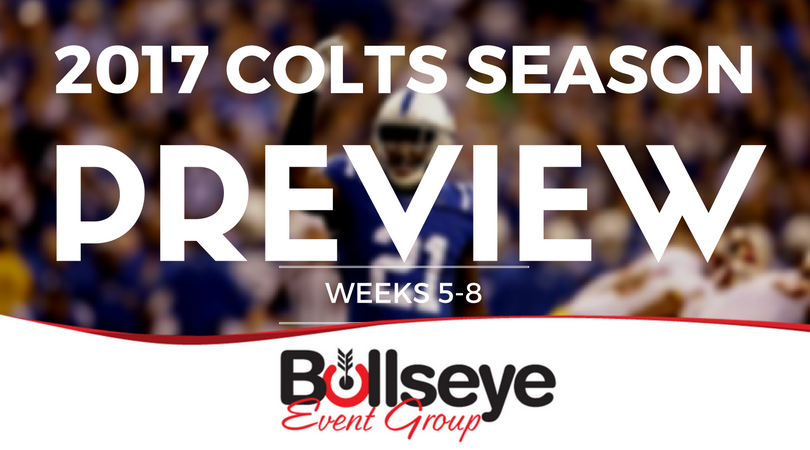 One of the most highly anticipated games for Indianapolis Colts fans this season will be their Week 5 matchup against the San Francisco 49ers; however, the excitement isn’t building around the game. Colts owner Jim Irsay announced that the team will unveil a statue on Saturday, October 7, the day before the matchup. At halftime of the team’s game against the 49ers, the Colts will hold a jersey retirement ceremony for the future Hall of Fame quarterback, a special weekend fans truly won’t want to miss.

With plenty of new offensive weapons and a much more experienced team, the Tennessee Titans, after a 9-7 campaign in 2016 that saw them narrowly finishing 2nd in the AFC South to the Houston Texans, will play host to the Colts in the team’s first (and only) Monday Night Football game of the year on ESPN. Titans quarterback Marcus Mariota, coming off of a torn ACL in 2016, looks to continue to build off of impressive rookie and sophomore campaigns for the team. The Colts’ newly revamped defense will face an offensive attack that could truly test the durability of the core. This will be the first of two matchups for these two teams, with the second coming in Week 12.

Despite finishing 3-13 and dead last in the AFC South in the 2016-17 NFL season, the Jacksonville Jaguars are a team that always seems to cause problems for the Indianapolis Colts. With a new head coach in Doug Marrone and former coach Tom Coughlin returning as the team’s new executive vice president of football operations, the Jaguars are touting a new “culture” surrounding the team. This will be the first of two matchups for these two teams, with the second coming in Week 13.

Always facing each other in the NFL’s preseason, this time the Colts and Cincinnati Bengals will square off in the regulars season at Paul Brown Stadium in Cincinnati, OH. Just a short drive down I-75, the Colts will hope to contain the offensive duo of Bengals quarterback Andy Dalton and wide receiver A.J. Green, two of the best in the game to date. Despite a shaky defense and a 6-9-1 record in 2016, the Bengals will prove to be one of the Colts’ tougher opponents of the 2017 season as both teams are looking to get back to the NFL playoffs.