The Indianapolis Colts are looking to rebound from their disappointing 2016 campaign and return to the NFL Playoffs in 2017. We’re looking at the road that lies ahead, with the final installment of the 2017 Colts Season Preview. 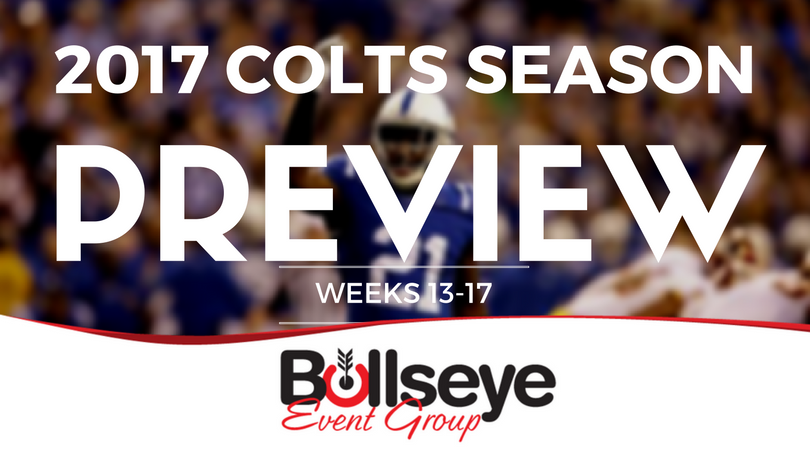 The second of the two divisional matchups, the Colts will travel to Jacksonville, a city that hasn’t always been kind to the team. Although last year the team’s squared off in the NFL’s International Series at Wembley Stadium in London, the Colts have lost the last two “road” games against the Jaguars.

Heading to upstate New York in early December could be a cause of early concern for the Colts, who have historically had difficulties playing in inclement weather. However, the Colts have won seven of their last nine matchups against the Buffalo Bills. Despite having a youthful and inexperienced defense, the Colts will be facing an offense that faces uncertainty at the quarterback position, with quarterback Tyrod Taylor returning at the helm.

No Manning-matchup in Week 15, however the Denver Broncos appear to be one of the marquee matchups of each of the past five seasons for the Indianapolis Colts. A Thursday night home game, in mid-December, with playoff chances on the line; does it get much better? The Broncos come into Indianapolis with new head coach Vance Joseph, with much of their starting Super Bowl 50 defense still in tact. Colts fans will also get to see the team debut their Nike Color Rush uniforms in this game, debuting an all-blue uniform and pant combination.

For the first time in the regular season as head coach of the Colts, Chuck Pagano will return to Baltimore to face the Ravens, where Pagano was an assistant from 2008-11 under current head coach John Harbaugh. A special Saturday matchup, the teams will square off on a Saturday, giving the Colts two long weeks back-to-back, following the short week in Week 14.

For the seventh straight year, the Colts and Houston Texans square off in the final month of the regular season. After winning the first 13 home games against Houston, the Colts have dropped their last two, including relinquishing the AFC South to the Texans in 2016. This game is sure to have divisional implications on the line, and could be a battle to get into the NFL Playoffs.

On paper, the Indianapolis Colts have the easiest schedule in the NFL. Combine that with a new general manager at the helm and a completely re-tooled defensive 11, and fans have a renewed sense of hope for the team’s NFL Playoff chances. The Colts’ opponents boasted just a .424 winning percentage in 2016, the worst in the NFL. And despite having just three primetime pairings this season, Colts fans have a lot to be excited about for the future of the team.