Golf Returns to the Olympics in 2016

One of the Biggest Stories of Golf in the Coming Years– After Over a Century, Golf Returns as an Olympic Sport at the 2016 Summer Olympics

A sport that dates back to the 15th century, golf was last part of the Olympic program at the 1904 Games in St. Louis, MO, USA, when the United States and Canada were the only two competing countries. In contrast, at least 30 countries are expected to be represented in both the men’s and women’s competitions at the Games of the XXXI Olympiad –otherwise known as the 2016 Rio Olympic Games in Rio de Janeiro, Brazil. A true testament to the game’s popularity.

Margaret Abbott won the women’s golf tournament of the 1900 Olympic Games in Paris, becoming the first American woman in any sport to win an Olympic event. At the 1904 Games, Canadian George Lyon won the gold medal. The only other international golf event took place in Berlin, Germany around the 1936 Olympic Games, now known as the “Hitler Invitational.”

The proposed Olympic competition for both men and women is a 72-hole individual stroke play tournament, with the lowest score earning a gold medal. The top-15 ranked players of each gender will qualify with a limit of four golfers qualifying from a country. The remaining 45 spots will go to the highest-ranked players from countries that do not already have two golfers qualified. In case of a tie for either first, second or third place, a three-hole playoff will determine the medal winners.

“I don’t know that we will ever get to build a more significant golf course. It is the opportunity of a lifetime.” 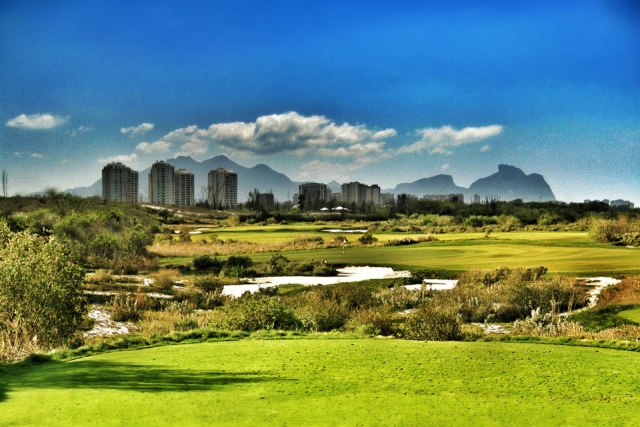 The Olympic Golf Course. Designer Gil Hanse first visited the proposed site of the Olympic golf course in 2011. His golf course design firm was selected from eight finalists in 2012, with a proposal that is cited for its design characteristics, including accentuation of the natural dune formations and retention of the natural contours of the land. Hanse and his family moved to Rio in early 2013 to start course construction, which is scheduled for completion later in 2014.

The course is being built at Reserva de Marapendi in Barra da Tijuca –the district that will contain the largest number of Games venues– located approximately five kilometres from the Athletes’ Village and seven kilometres from the Main Press Centre (MPC) and the International Broadcast Centre (IBC). After the 2016 Olympics, the course will be used as a public facility with the chief purpose of promoting golf in Brazil, representing one of the most important Olympic Games legacies for sport development in the country.

One Response to “Golf Returns to the Olympics in 2016”

That was awesome for the golf lovers like me