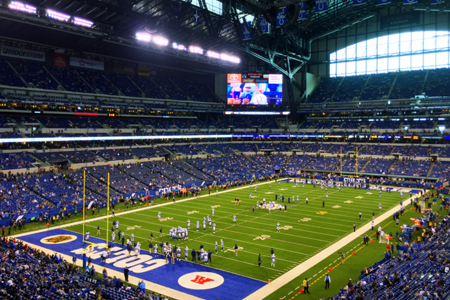 The Indianapolis Colts didn’t make it into the playoffs. But they won a game with two quarterbacks off the street. That should count for something.


In this, the last game of the season, the Colts showed that they had enough in their backbones to defeat a division rival, the Tennessee Titans 30-24. They will finish the season 8-8. The Titans will have first pick in the draft next year. Hopefully that will help their 3-13 record improve.


Like the Colts, the Titans were also down their star quarterback, Marcus Mariota. But, by the end of the season, it’s more about what a team can do with who’s still healthy, than what they planned pre-season. The Colts were able to pick up two quarterbacks, and cobble together a decent offensive front. The last game of the season turned into an audition for backup quarterback for Josh Freeman and Ryan Lindley. The Colts did something interested with the limited time they had to work with. Instead of trying to cram as many options as possible into the playbook, the offensive team split the job in to pieces. Giving Lindley the last two minute drill, and Morris the rest of the game. It shook up the Titans defense and proved fairly effective in creating points. Andrew Luck was still sidelined, which added to the number of quarterbacks with eyes and ears to help make calls for the offense.


The Colts defense, which has been improving throughout the late season, made a few key blocks and was able to stop the Titans from taking the momentum late in the 3rd quarter. The Tennessee offense was unable, like so many times this year, to convert on the key 3rd downs. Early in the game, it was a high-scoring for both teams. The Colts especially had a good early set of downs and drives. It what might be Pagano’s last game, the Colts showed their strength. Robert Mathis made sacks, Jerrell Freeman played extraordinarily well.


As of early Monday morning, the future of Colts head coach Chuck Pagano is up in the air. He’ll be meeting with owner Jim Irsay this morning. His contract is up this season. Many Colts fans see the general manager, Ryan Grigson as the real source of the problem. Regardless of his overall winning record, a hurt star quarterback, and problems with the GM, it seems as though only a Super Bowl ring would be able to keep him his job. He went 11-5 for his first three seasons. He’s gone to the playoffs for those three years as well. It seems like we should just let the man work, and give him a better o-line to protect his stars. The Colts players, like Robert Mathis, seem to be behind him. Awarding him what may be his final game ball at the end of yesterday’s game. And the city seems to be behind him as well. Pagano isn’t the only coach waiting to hear about their job security on this, “black Monday.” But in Indianapolis, it seems to be on the mind at the end of the season.


They needed a total of nine games to go their way in order to make the playoffs. Most importantly, the Houston Texans had to lose their game. They didn’t. The Texans ended the season with the better record and will move onto the playoffs as AFC South champs, with that coveted home-field advantage. Hopefully, they won’t hang a banner for this loss.


It’s hard to end a season this way. It’s been a crazy season for Colts fans. It seems like there should still be more Colts football to watch. If you’re still jonesing for football, the first playoff game will be January 9th. The Super Bowl is about a month away on February 7th. There are still tickets for Super Bowl 50 available if you’d like to go see that game in person.


But for now, we’ll keep wondering what this season might have looked like with a healthy quarterback and a solid o-line.