Fleetwood Mac On With The Show Tour 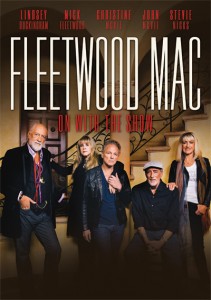 What an awesome concert season this is turning out to be!

Even more awesomeness: After a 16-year absence, Christine McVie re-unites Fleetwood Mac band mates Mick Fleetwood, John McVie, Lindsey Buckingham and Stevie Nicks as they perform 34 shows in 33 cities. Christine has not toured with the band since 1998’s The Dance Tour. With Christine back, the band will be able to perform songs like “Little Lies,” “You Make Loving Fun,” “Everywhere” –fan favorites they haven’t been able to play in nearly 20 years. Rumor has it, a new album might be in the works, too.

Fleetwood Mac’s On With The Show Tour plays Indianapolis on Tuesday, October 21 at the Bankers Life Fieldhouse. Tickets for all shows are available at Bullseye’s discount ticket microsite.

“Being back is really a time warp. The tour is going to be great fun. I feel like a pig in poo right now.”

Fleetwood Mac toured in 2013 without Christine, but the tour was cut short due to bassist John McVie’s cancer diagnosis. After chemotherapy treatment, John is on the mend and ready to tour with the entire band this summer.

At times it seemed there would be no chance Christine McVie would join the band ever again, but after a divorce, she decided the best way to get over it is to tour with Fleetwood Mac. The band is also scheduled to appear on TODAY’s Summer Concert Series on the Plaza At Rockefeller Center on October 9.