Friday, October 24 marks the 100-day countdown to Super Bowl XLIX. As the big game gets closer and closer, the Valley of the Sun is getting primed to host the third Super Bowl in 19 years on February 1, 2015. Good on you, Arizona!

Why was Arizona unanimously selected by NFL owners to return in 2015 for Super Bowl XLIX? Check out the actual video that sold them right here:

What a Difference Five Years Makes

Since hosting Super Bowl XLII in 2008, Phoenix has been transformed into a beautiful, crowd-friendly, vibrant metropolis boasting a re-envisioned downtown and world-class attractions including new hotels, spas, shopping centers and event venues. What else is new? 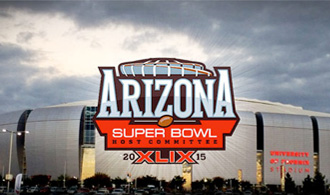 If you haven’t booked your trip to Super Bowl XLIX, what are you waiting for? It’s not too late to secure one of Bullseye’s luxury Super Bowl XLIX Travel Packages, which include event tickets for exclusive parties, the WM Phoenix Open and -most important- upper-level end zone tickets for Super Bowl XLIX at University of Phoenix Stadium. Call us today at 888-900-6564 for more information about our luxury travel packages, group travel planning and individual tickets to additional events and parties (like the Pro Bowl).