Hands down: the Indianapolis Colts 2015 Mini Camp was a blast. Fans got a chance to see the Colts practice months before the official start of the season. But, what exactly is a Mini Camp? This past Wednesday, the Colts set up an open house in Lucas Oil Stadium, and welcomed the passionate fans to come be apart of the practice before the season begins.

The day started for most fans around 1:30 when they lined up around Lucas Oil Stadium waiting to get in. When doors opened, fans were welcome to walk down onto the field and participate in a bevy of activities. Many fans took the opportunity to take pictures with the field-goal posts, the fifty-yard line and the Colts very own superfan. 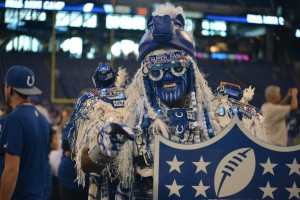 Part of the welcoming committee to the stadium were the Colts cheerleaders, who offered their signatures and their beautiful smiles to all. Down on the field, kids could play in bouncy houses shaped like a giant football, a horseshoe, and humongous horse head. Kids could also try out their own football practice drills. Fuel Up to Play 60 set up activities for kids to practice their quick feet, jump over obstacles, and tackle a very intimidating foam defender. 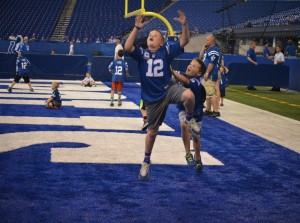 By four o’clock all the fans had to clear the field, because the players were coming to practice. Blue came out to say hello and throw t-shirts while we were waiting in open seating in the stands. Before the practice, the players walked around the stadium to offer their signatures. It offered a great opportunity for fans to interact with the new players and 2015 draftees.