The 2019 NFL season schedule is officially set, with each team knowing the road that they face if they want to contend for Super Bowl 54 in Miami. A closer look at the season schedule for the 2019 Indianapolis Colts squad. 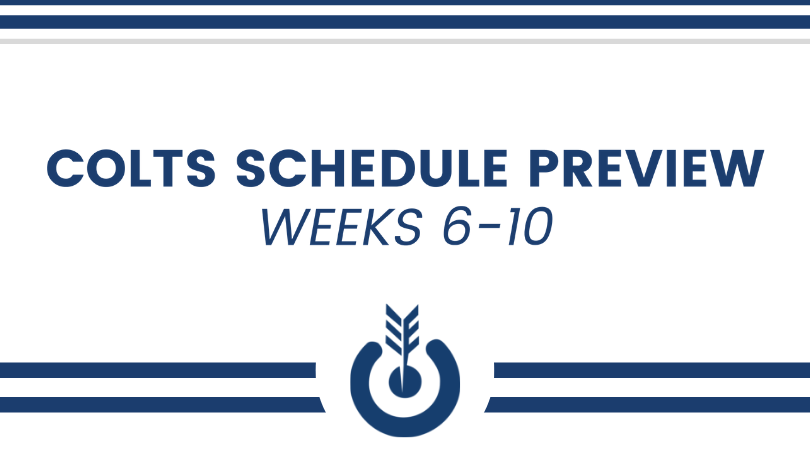 An early week of relief for the Colts, with a bye in the first half of the season.

The defending AFC South champions in 2018 (11-5), the division rival Houston Texans head to Lucas Oil Stadium for the first of two matchups against the Colts in 2019, in what is also a rematch of the 2018 NFL Wild Card matchup.

A relatively quiet offseason for the Texans, aside from franchise-tagging defensive pass rusher Jadeveon Clowney and signing of safety Tashaun Gipson from Jacksonville, the Texans hope the continued health of quarterback Deshaun Watson and the return of wide receiver Will Fuller will help them take that next step.

Touting a roster-in-progress with plenty of upheaval in the 2019 offseason, the Denver Broncos come to town for a second-straight Colts home game (and three of four in weeks 6-10).

After trading for quarterback Joe Flacco from the Baltimore Ravens, the Broncos cut 2018 QB Case Keenum and drafted rookie Drew Lock out of Missouri. Also on the offensive front, the Broncos drafted standout Iowa tight end Noah Fant, and return playmakers like Emmanuel Sanders and Phillip Lindsay in an offense that could give the Colts defense a test.

Gone are the days of facing running back Le’Veon Bell and wide receiver Antonio Brown when facing the Pittsburgh Steelers, both leaving or being traded this past offseason. Instead, a revitalized Steelers roster is what the Colts will see when traveling to Heinz Field in Week 9.

With Bell sitting out the entirety of the 2018 season, the Steelers workhorse running back turned standout was James Conner, the rookie from the University of Pittsburgh. Wide receiver JuJu Smith-Schuster is ready to become the #1 receive he spent most of the 2018 season showing he could be, and the Steelers, always a tough matchup for the Colts, will look to continue building around quarterback Ben Roethlisberger.

Quite a contrast for the Miami Dolphins from the 2018 to 2019 seasons, as the Colts will face a new quarterback and a rookie head coach at home in Week 10.

After the Cardinals drafted quarterback Kyler Murray with the #1 overall pick, the Dolphins made the trade for sophomore QB Josh Rosen to pair with new head coach Brian Flores, formerly of the New England Patriots, as well as signing signature NFL journeyman Ryan Fitzpatrick.

The best pre-game experience in the league, the Colts VIP Tailgates are BACK for the 2019-20 Season! Learn more about our signature pre-game tailgate before every Indianapolis Colts home game.