In just a matter of hours, the 2018 edition of the Indianapolis Colts will officially hit the field at Grand Park Sports Campus in Westfield, Indiana. And while many aren’t of the belief that the Colts are a serious Super Bowl 53 contender, the Colts spent the 2018 offseason reloading, equipped with a new coaching staff, a brand new rookie class, and the return of Andrew Luck. 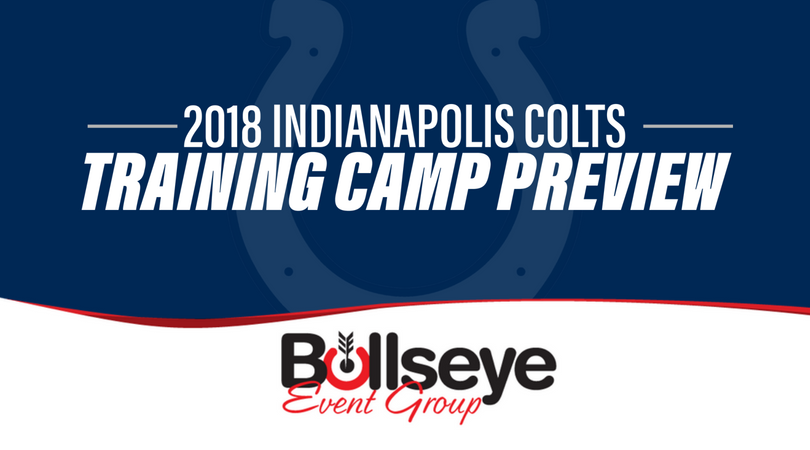 The Colts will report to the new home of their annual training camp, Westfield, Indiana’s Grand Park Sports Campus, on July 25th, with training camp officially kicking off on the 26th. The team will once again host fans with plenty of activities, beginning the the ‘Camp Kickoff’ on the evening of the 25th, continuing throughout until the Colts break camp on Saturday, August 18th.

The highlight of every training camp, the night practice and scrimmages, will take place on Sunday, July 29th (accompanied by a BBQ Bash), a high-school themed Friday Night Lights on Friday, August 3rd, and the final night practice on Tuesday, August 14.

As always, Colts City will be present with plenty of fun for the entire family, including the Colts in Motion Experience, the Play 60 Zone, Colts inflatables and a 40-yard dash. The Pro Shop will be onsite to help you get geared up for the 2018 season, participate in the 50/50 raffle, school supply drive and plenty more.

The 2018 edition of the Indianapolis Colts enter the season with a refreshed coaching staff, much to the approval of fans around Colts Nation. Super Bowl champion offensive coordinator and former Colts quarterbacks coach Frank Reich will take the reins as head coach, bringing with him an entirely new staff.

Formerly the passing game coordinator/linebackers coach for the Dallas Cowboys, defensive coordinator Matt Eberflus is tasked with revamping the team’s image on as a primarily-offensive attacking team. On the other side, new offensive coordinator Nick Sirianni joins the team after spending the past five seasons with the San Diego/Los Angeles Chargers as the team’s wide receivers coach (2016-17), quarterbacks coach (2014-15) and quality-control offense (2013).

What some would consider one of the stronger draft classes of the past several season for the Indianapolis Colts, general manager Chris Ballard seemingly focused on two glaring needs in the 2018 NFL Draft; the offensive line and the defensive front seven.

All eyes will be on the offensive line with the return of quarterback Andrew Luck in 2018, and Ballard ensured that the team would not be short on depth, spending two of the team’s first draft picks on offensive linemen in offensive guards Quenton Nelson (Notre Dame) and Braden Smith (Auburn).

On the defensive side of the ball, Ballard primarily focused on the team’s pass rush capabilities, drafting linebacker Darius Leonard (South Carolina State) in the second round, before rounding it out with defensive EDGE rushers Kemoko Turay (Rutgers) and Tyquan Lewis (Ohio State).

The moment many Colts fans have waited nearly two years to say; quarterback Andrew Luck is back.

After finally being seen publicly throwing a football at mini camp in June, general manager Chris Ballard publicly stated that Luck has been fully cleared and will have “no limitations” as the team reports for training camp in a matter of days.

As a matter of fact, Luck has already reported to the Grand Park Sports Complex, three-days ahead of time, presumably to get settled in ahead of the first full-speed action the quarterback has seen in years.