As mandatory organized team activities (OTA) are set to begin, we’re looking at the 2018 Indianapolis Colts schedule week-by-week. Up next, we’re in the heat of the Road to Super Bowl 53 with week’s nine through 13. 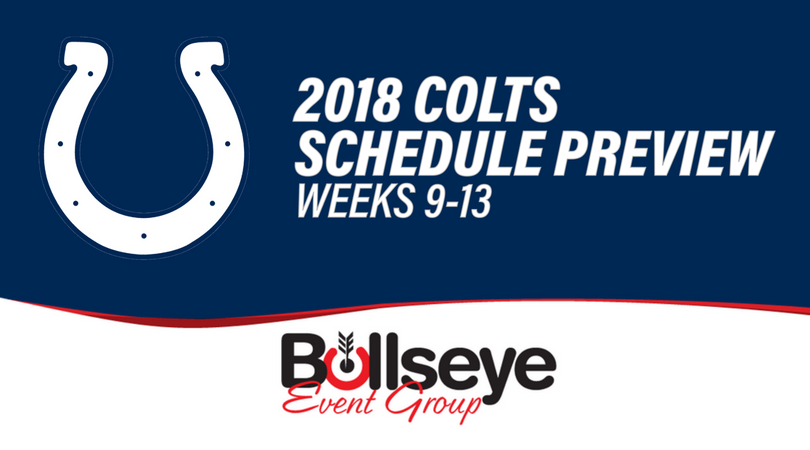 The reigning AFC South champion (and AFC Championship runner-up) Jacksonville Jaguars come to town in Week 10, a crucial division matchup for both sides at a crucial point in the season.

Coming off a bye week that falls right in the middle of the season, the Colts hope to be a refreshed-and-healthy team heading into this Week 10 matchup. The Jaguars, despite losing key offensive weapons like running back Chris Ivory and wide receiver Allen Robinson Jr., have retooled the offensive line, adding the prize of the 2018 offseason in former Panthers guard Andrew Norwell. The Week 10 matchup between divisional foes will also feature former Colts wide receiver Donte Moncrief’s first return to Indy since not being re-signed this past offseason.

Another late-season first divisional matchup, the second in a row at home, as the Colts will host the AFC South runner-up Tennessee Titans in Week 11.

The Titans, despite losing plenty of big names this offseason, were considered by many the winners of the 2018 offseason, signing two former New England Patriot standouts in running back Dion Lewis and defensive back Malcom Butler. But it wasn’t just free agency that the Titans capitalized on, adding linebacker Rashaan Evans in the first round of the 2018 NFL Draft.

With Tennessee always being a tough matchup for the Colts, the new-look defense will almost definitely be looking at their second-straight week facing an offensive powerhouse.

One of the more interesting matchups for the Colts in the 2018 season, the team will complete the rare three-game home stand hosting the Miami Dolphins, a team with a radically different roster from the previous year.

Miami made waves this offseason, trading perennial Pro Bowl wide receiver Jarvis Landry to the Cleveland Browns before the 2018 NFL Draft. But that wasn’t the only big move the Dolphins made in the 2018 offseason, also letting defensive powerhouse Ndamukong Such and center Mike Pouncey, among others, leave via free agency. To fill the gaps? The Dolphins brought in plenty of new faces, including wide receiver Danny Amendola, defensive tackle Akeem Spence, quarterback Brock Osweiler and former Colts running back Frank Gore.

Aside from the return of former running back Frank Gore, the Colts and Dolphins matchup features two teams in similar positions; questions with quarterbacks returning from injury, roster turnover and plenty of new faces.

In Week 13, the Colts will face a familiar foe, the Jacksonville Jaguars, for the second time in three weeks, marking yet another critical late-season divisional matchup.