In the final weeks of June, as teams begin to break for their final down time before training camp and the season begins, a look at some of the biggest headlines from the week of June 26, 2017 in the league that never sleeps. 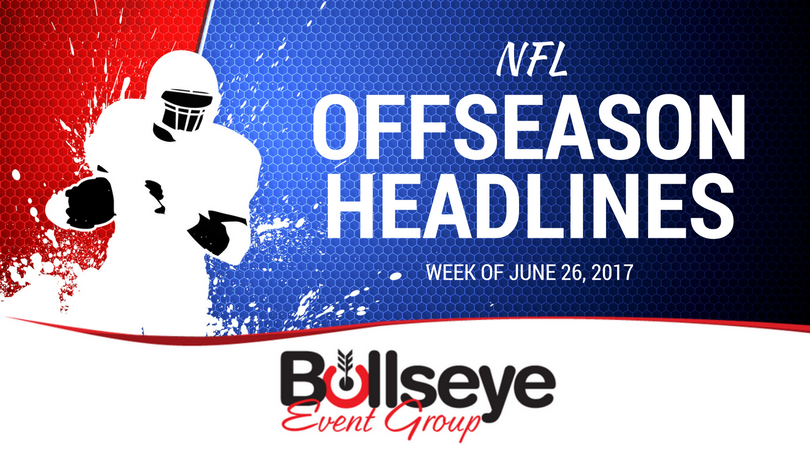 After securing quarterback Derek Carr in a massive long-term deal, the team stayed busy on the extension trail, continuing to work to keep their offensive core together.

The #Raiders are signing G Gabe Jackson to a 5-year extension worth a whopping $56 million, source said. Locking up their future.

The Oakland Raiders and offensive guard Gabe Jackson agreed to a five-year, $56 million extension on Thursday. A key piece to the protection of their now-franchise QB Carr. Jackson was the third round pick in the 2014 NFL Draft, a draft class that has been very kind to the Raiders, producing both Carr and linebacker Kahlil Mack.


Another Comeback for Brett Favre?

Didn’t think you’d still be hearing about a comeback for Favre in 2017, did you? Well during an appearance on ESPN Wisconsin’s Wilde & Tausch, Favre hinted that he’s thought about returning to the league once again…but this time as a coach or general manager.

“That type of stuff has crossed my mind,” the 47-year-old former quarterback said to ESPN’s Jason Wilde. “Because it’s no different to me than coaching. It’s being involved in the game in some aspect. I believe that would be a dream job, working as a coach [in Green Bay] or in some form of administration.”

You can read an entire transcript of Favre’s comments to Wilde by clicking here.

The Dallas Cowboys will be forced to begin their 2017-18 NFL season without a returning member of their defensive front seven.

Cowboys defensive end David Irving will serve a four-game suspension handed down by the league after reportedly violating the NFL’s policy on performance enhancing substances.

Official word from the NFL that David Irving has been suspended for the first month of the season. pic.twitter.com/9t8Ud6QHPF

Irving is heading into his third season with the Cowboys, coming off a 2016 campaign that totaled four sacks in 15 appearances.