2017 Indianapolis Colts: Which Rookies Will Shine?

For the first time of the NFL’s offseason, team’s are reporting as a whole 90-man roster this week for organized team activities (OTA) at team complexes. The Indianapolis Colts, who report to their first full-team OTA’s on Monday, have completed the rookie mini-camp portion of their offseason. After early action, what rookies are most likely to stand out for the team in the upcoming 2017 NFL season? 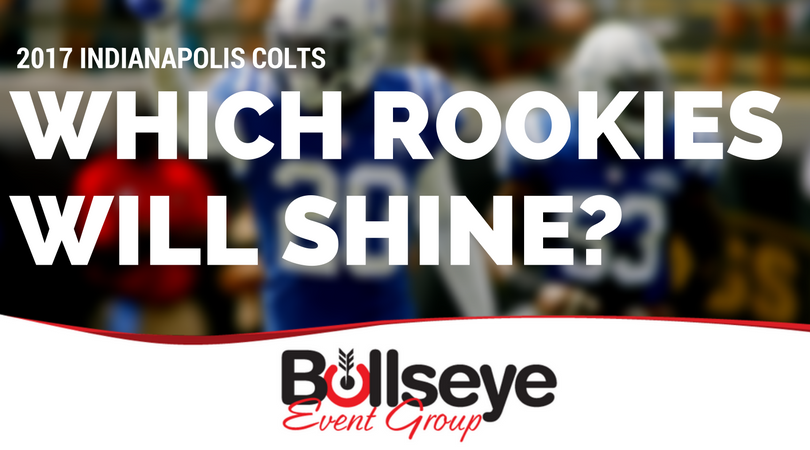 To recap, a look at the Indianapolis Colts draft class:

Most Likely to Shine: Malik Hooker

At the #15 pick, the Indianapolis Colts got a steal in safety Malik Hooker. Called the “best center fielder” in the draft by many, Hooker slid, largely due in part to his offseason hip and hernia surgeries. Although he was forced to sit out of the rookie mini-camps, Hooker’s speed and athleticism make him a surefire plug-and-play starter for this newly renovated Indianapolis Colts defense.

A team desperate to create turnovers, Hooker’s ballhawk-nature in the center of the field provides the Colts with a home-run hitter they haven’t seen sign safeties Bob Sanders and Antoine Bethea graced the secondary. If Hooker can stay healthy, he might just be the defensive stud the Colts have been looking for.

With starting running back Frank Gore and the newly re-signed Robert Turbin on the roster, the Colts were able to stock pile the defensive players and focus on finding a value project at the running back position in the draft. Marlon Mack, the fourth-round running back out of the University of South Florida, very well could be the back of the future for the Colts.

A speedy back with an explosive burst, Mack has an opportunity to sit under one of the all-time greats in Gore, while refining his running game and adjusting to the NFL speed.

In the 2017 NFL offseason, it was clear new Indianapolis Colts general manager Chris Ballard’s focus was on revitalizing the defense. Part of this revitalization meant the team parting ways with aging middle linebacker D’Qwell Jackson, the team’s defensive quarterback of sorts for the past three seasons.

Despite signing multiple outside linebackers, Ballard chose to focus on the defensive secondary and line in the NFL Draft, making Anthony Walker Jr. the only linebacker the team took in the draft. After a slow collegiate start, Walker led the Northwestern Wildcats in tackles (122) and tackles for loss (20.5) in his first full season starting in 2015, receiving All-American recognition from the AP and Sports Illustrated, and All Big 10 honors.

With the Colts being thin at inside linebacker, and the team’s 3-4 defensive scheme, Walker has an opportunity to shine right away for the team and step into an important role, becoming a leader on the team’s new and much-younger defense.

One Response to “2017 Indianapolis Colts: Which Rookies Will Shine?”

Im a huge colts fan. But until Irsay gets’ smart and fires’ pagano my colts will nwvwer win another superbowl. Pagano is not a good NFL head coach. Bruce Arians had them on a 9 game win streak, when pagano came back he took credit for it and then lost in the first playoff game. Irsay made a huge mistake by keeping pagano and letting Arians go to arizonia. Pagano wants’ to be his player’s buddy and dance in the locker room after games. Pagano you don’t even now how to use a play clock and your the reason Luck was hurt so often and you tried covering up his injuries. Pagano=pathetic!! your horrible as a coach. Fire pagano please